With the memorial for Christine Nystrom still fresh in our minds, my colleague Janet Sternberg shared a couple of photographs that I thought I would share with you all here.  The first, in glorious black and white, is from the first Media Ecology Association convention in 2000.  I'm on the left, Chris Nystrom in the middle, and yes, that's Camille Paglia on the right: 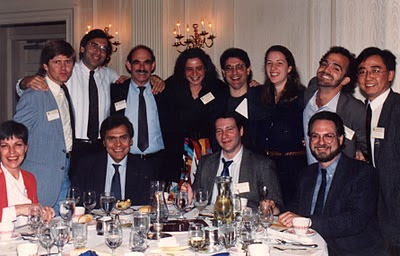 Of course, that's Chris seated on the left, with Neil Postman to the right of her, and me (man do I look young) to the right of him, and Bill Petkanas seated all the way on the right.  Standing, from left to right, are Bob Albrecht, Paul Thaler, Gene Secunda, Janet Sternberg, Sal Fallica, Missy Alexander, Thom Gencarelli, and Casey Lum.

My Eulogy for Christine Nystrom

We had a beautiful memorial service today at St. George's Chapel in Manhattan, with eulogies delivered by Chris's friend and neighbor Anne Garfinkel, her colleague from the media ecology program Terry Moran, fellow students Janet Sternberg (who read a message from another former New York University colleague Henry Perkinson as well as making her own remarks) and Susan Maushart, and myself.

So, I thought I'd share the eulogy I delivered here, even though there is some overlap with the previous entry I posted here, Christine Nystrom 1941-2010.  I think there's enough here that's different to make it worth posting, and anyway it's my blog, and I'll post it if I want to.

I'm also grateful to my MA student Mariusz Han, SJ, for recording the service, and if it's possible, I'll share that as well at a future. date.  Until then, here is what I had to say:


Each one of us remembers Christine Nystrom in our own way, according to our own unique experiences.  And that means that each one of us has brought our own small portion of her memory with us here today.  And in bringing all of these bits and pieces of her life together today, in remembrance and commemoration, we gain a sense of her presence, here and now.  We can hear her voice as we speak to one another, and we can see her light reflected when we look into each other's eyes.

Many of us remember her as part of a trinity of Chris Nystrom, Neil Postman, and Terry Moran— they were the media ecology program for many, many years.  And gathered together here at St. George's as we are, I don't think it out of place to say that they constituted the Camelot of media ecology.

Those of you that remember our little Camelot may recall how Neil had the charm, and Terry had the authority, and how Chris, Chris was the deep thinker. I remember many times when we would be in the midst of conversation or discussion, and Chris would suddenly stop to ponder some question or concept.  We would wait for her to continue what she was saying, but the silence would only grow longer and longer, and longer.  Inevitably so much time would pass that someone else would start talking, only to be interrupted a short while later, when Chris had returned from her reverie and was ready to share her insights with the rest of us.  And it didn't matter that the other person was in the middle of saying something, Chris's train of thought could not be derailed.

Chris had a brilliant mind, and she was the first true theorist of media ecology, developing hypotheses, models, and methodologies.  Chris brought structure, order, and coherence to the media ecology program because that was the kind of person she was, structured, orderly, and coherent, but also because that was what the program needed, and Chris was the kind of person who did what needed to be done.

Chris was a dedicated and demanding teacher, insisting on scholarly rigor, unwilling to accept anything less than our best efforts.  And she always gave us her best efforts, she paid attention to what we had to say, really read what we wrote, and critiqued both form and content in fine detail.  She could be intimidating, and she didn't win any popularity contests, but she pushed us to be better, to be the best that we could be.  Chris was my teacher, mentor, and advisor, and I credit her with making me a better writer, and teaching me how to be a scholar.

Chris did not care for the spotlight, she preferred to remain behind the scenes, supporting her colleagues and her students, as a critic, editor, and often unsung collaborator on their work. Chris did not measure success by the number of publications she had, or the frequency of their citations, but by the hearts and minds that she touched and she moved.  And perhaps more than scholarship, and intellect, and education, Chris was devoted to service.  She was a team player, and she was dedicated to serving her students and her colleagues, and her community and her church.  Christine Nystrom provided the kind of intangible contributions that are all too often overlooked, but absolutely essential to the wellbeing of any endeavor.  Her contributions to the field of media ecology will influence scholars for generations to come, and we in the Media Ecology Association have added an award in Christine Nystrom's name, for service to the field of media ecology.

Chris was a woman of great humor and imagination.  I recall one time when she became irritated by a colleague's insistence on providing evidence to support any statements that were being made.  Chris responded by pointing out that there is no real evidence that anyone actually spoke before 1877, the year that sound recording was invented.

She understood that every code and mode of communication has its biases, its strengths and limitations.  In other words, Christine Nystrom was a media ecologist.  She recognized that different symbol systems each are equally valid in their own way.  Chris understood the importance of myth and ritual, of religion and spirituality, of the experience of sacred time and space, how they operate in a different universe of discourse than that of testable hypotheses, and rationalism and empiricism. She understood the message of this medium, how it functions in the realm of feeling and form.  And so, it is only fitting that we gather together here at Chris's house of worhsip, to remember Chris in a language and setting transcending the form of everyday life.

Chris and I first bonded over our mutual love of Tolkien.   And when we met for the last time, she mentioned the song Bilbo sang in The Lord of the Rings, and I would like to read it to you now:

I sit beside the fire and think
of all that I have seen,
of meadow-flowers and butterflies
in summers that have been;

Of yellow leaves and gossamer
in autumns that there were,
with morning mist and silver sun
and wind upon my hair.

I sit beside the fire and think
of how the world will be
when winter comes without a spring
that I shall ever see.

For still there are so many things
that I have never seen:
in every wood in every spring
there is a different green.

I sit beside the fire and think
of people long ago,
and people who will see a world
that I shall never know.

But all the while I sit and think
of times there were before,
I listen for returning feet
and voices at the door.

And so we sit and think, and remember and commemorate, and celebrate the life of Christine Nystrom, with gratitude for her intelligence and her wit, her service and her dedication, and her faith and her caring.
Posted by Lance Strate at 10:02:00 PM 1 comment:

The EPIC Journey for Autism

﻿﻿﻿One of the parents at my daughter's school, Jodi Wiseman, created a video about the school for a fundraiser that was held at the Montclair Art Museum last month, and has now uploaded it to Vimeo, so I thought I'd share it with you here on Blog Time Passing.  As you may know, my daughter has moderate autism, and goes to a special school that specializes in helping children with autism, EPIC School.  She's the only member of our family to appear in this video, but some other parents give their testimonials about the school.
Kudos to the filmmakers for an excellent production!
EPIC stands for Educational Partnership for Instructing Children, in case you were wondering, and you can take a look at the school's website at http://www.epicschool.org.  It's a wonderful place, and all of us parents are really very, very grateful for it.
Posted by Lance Strate at 6:32:00 PM No comments: