Interfacing With the Cosmos

So, with the new Star Wars movie premiering in just a few short hours (and I'll be going to see it in IMAX 3D today), it seems like a good time to share this video.

But first, let me provide some context. Last year, my friend and Fordham University colleague Paul Levinson invited me to contribute to an anthology he was co-editing, entitled Touching the Face of the Cosmos: On the Intersection of Space Travel and Religion. You can read all about the plans for the book on a post on his blog. So, I was very happy to agree, and also arranged for Rabbi Barry L. Schwartz of Congregation Adas Emuno in Leonia, New Jersey (where I'm currently serving as president), to provide one of his sermons, since Rabbi Schwartz is a strong supporter of our space program.

Some of the other contributors include the Director of the Vatican Observatory, the science fiction author and public intellectual David Brin, science fiction author Gregory Benford, and several former NASA officials, not to mention an interview with John Glenn, the first American astronaut to orbit the planet.

And as you may have guessed, I did provide a chapter as well, and I am very pleased to be in such august company. But regarding my contribution, tempting as it was, being a longtime fan of science fiction, to write something in a positive vein, I warned Paul that I would be contrarian, in conjunction with Lewis Mumford's pointed criticism of the space race back in the sixties. Paul, never one to shy away from opposing points of view, had no problem with that.

As a play on the title of the book, I called my essay, "The Touching Interface of the Cosmos," and I made it somewhat poetic in style, my intent was to be reflective and suggestive, rather than academic (the book is intended for a general audience).

So anyway, as a member of the board of trustees of the Institute of General Semantics, I decided that the  symposium following the annual Alfred Korzybski Memorial Lecture this fall would be a good venue to give a talk based on my book chapter, and a good opportnuity for Paul to give a talk about the book as well. And that's what happened, with the two of us being grouped together with another paper presented by my old friend and classmate, Paul Lippert. This took place on October 3rd.

Now, if you want to see the playlist for 2015 AKML & General Semantics Symposium just click on the old link there.

And if you'd like to check out Paul Levinson's talk about the book, Religion as a Necessary Engine of Space Travel, you can click on that old link, and I should note that what he has to say does provide some context to my talk.

But you can also enjoy (presumptuous of me, I know) The Touching Interface of the Cosmos (my talk, not the chapter, the talk being excerpted from the longer essay) on its own, and do so again by clicking on that link. Or by clicking the play button below:

As for the book, here's a look at its very cool cover: 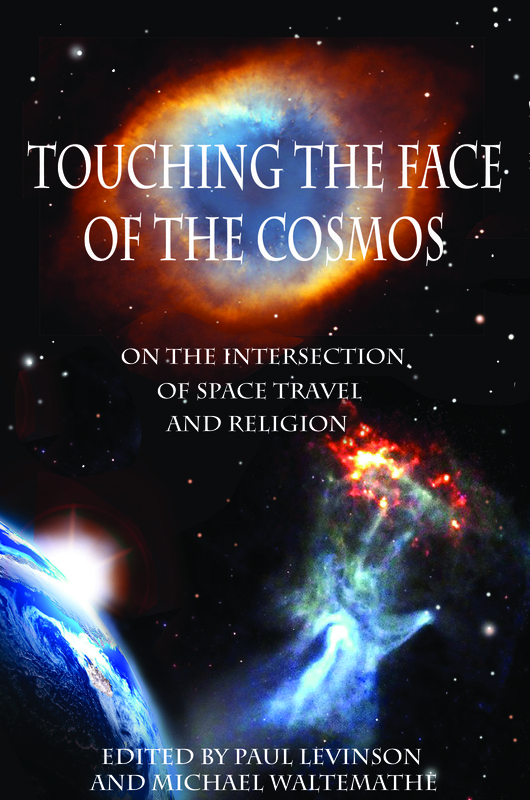 Speaking of the book, it just came out  in an ebook edition for the Kindle, and will be published in print this spring from Fordham University Press. Amazon already has the cloth and softcover editions available for pre-order!


So, while you are waiting, I hope the video provides you with a taste of things to come, and until then, keep watching the skies!


And that's the story!