So, while I'm on the subject of books published relatively recently, as per my previous post, Mandarin McLuhan and Media Ecology, I would like to share with you the publication of an anthology that I co-edited along with my media ecology colleagues, Corey Anton and Bob Logan.


But first, let me remind that back in 2011, in conjunction with NeoPoiesis Press, I helped to get Media and Formal Cause by Marshall and Eric McLuhan published. It is, of course, required reading for any card carrying media ecologist, and on the off off chance you don't have a copy, well, here:

For some, it meant a retrieval of Aristotelian metaphysics, for others a link back to Thomas Aquinas and Thomist philosophy, and for some a link forward to systems theory and the concept of emergence. And given all the interest that has been generated, a follow-up volume was inevitable, hence the anthology we co-edited, Taking Up McLuhan's Cause: Perspectives on Media and Formal Causality (do you like the pun in "taking up McLuhan's cause"? I came up with it). 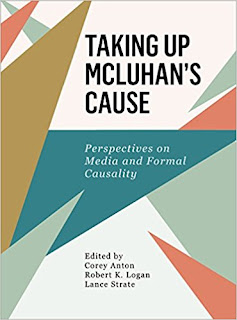 The anthology is published by Intellect out of the UK, and distributed in the US by the University of Chicago Press.  Here's the blurb that goes with it:

This book brings together a number of prominent scholars to explore a relatively under-studied area of Marshall McLuhan’s thought: his idea of formal cause and the role that formal cause plays in the emergence of new technologies and in structuring societal relations. Aiming to open a new way of understanding McLuhan’s thought in this area, and to provide methodological grounding for future media ecology research, the book runs the gamut, from contributions that directly support McLuhan’s arguments to those that see in them the germs of future developments in emergent dynamics and complexity theory.


And here is the listing of the books contents:

Chapter One: The Form of Things to Come: A Review of Media and Formal Cause
Corey Anton

Chapter Three: Medium as ‘Metaform’: An Inquiry into the Life of Forms
Paolo Granata

Chapter Five: The Effects That Give Cause, and the Pattern That Directs
Lance Strate

Chapter Thirteen: Disrobing the Probe, Unpacking the Sprachage: Formal Cause or the Cause of Form Reframing McLuhan and the Kabbalah
Adeena Karasick

And here's a nice review blurb that we received:

'Very good essays on a crucial intellectual topic. I’m hopeful that this anthology will help kick off another McLuhan movement rooted in McLuhan’s place in the great tradition of philosophies of causation. ' – Graham Harman, American University in Cairo


Not too shabby, huh? Well, that's all the good news, but now here's the bad news:

Notice the price? Unfortunately, it's only available in hardcover, and while the pricing is not that bad when it comes to academic books priced for library sales, it's not terribly affordable for the average Joe Scholar. But please do ask your library to order a copy if you can. And beg, borrow, or steal a copy if the cost is too much to bear, I really do think you'll find the collection worth your while.

So, it's time to get back to the old blogging board, and long past time to let you know about a book I published last year. It was a bit different from the other books I've published, as you can no doubt detect from the books title:

And just in case your ability to decode the Chinese logographic writing system has gotten a little bit rusty, that translates to


And now, before you get the impression that I am anything other than a typical monolingual American, let me assure you that I did not write the book in Mandarin. The translator was Hu Julan, who is also on the faculty of Henan University, where I have been a guest, and the book is published by Henan University Press. Here is what it looks like: 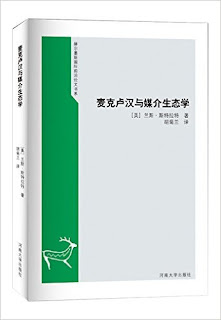 There's a nice view of it on this Chinese website where it's being sold, and here's a link to it's Amazon.cn page. And I don't know if it will work right, but I also see it strangely appearing after scrolling down a little on this Amazon.cn page, mixed in with a random assortment of products.

Of course, you can find it on a number of other sides as well. The cover is kinda small on this one, there's a really interesting effect when you scroll over the cover on this one, and then there' a funny version on this one, let me see if I can get it on here: 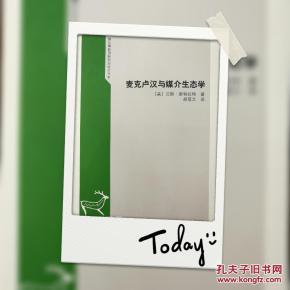 But as we all know, you can get anything you want on the original American Amazon's restaurant, and just in case you want to purchase a copy here in the good old USA, here you go:


I also want to make it clear that this is a new book, not a translation of a book that was already published in the English language. It is an original collection of essays, some of which you may have read elsewhere. In case you're wondering what you're missing out on, assuming you can't written Chinese, here's the contents:

Introduction to McLuhan and Media Ecology

Media Ecology and the Legacy of McLuhan

The Medium and McLuhan's Message

The Effects that Give Cause, and the Pattern That Directs

The Fall of Nations: The Fate of Social Systems in the New Media Environment

On the Binding Biases of Time

Drugs: The Intensions of Humanity

Narcissism and Echolalia: Sense and the Struggle for the Self

And there you have it, my first foray into Chinese book publishing. And not my last, as translation is already underway for another collection. I'll keep you posted!