So, I'm writing this blog post from Tel Aviv, where I'm spending this week (it's Fordham's spring break, in case you were wondering).


I'm here as the guest of the College of Management, which I'm told is much more than a business school, is in fact a full-fledged university, but has held onto its original name because it's an established brand here in Israel.  Anyway, within the College there is a School of Media Studies, and the Dean is an old friend and fellow media ecologist, Eva Berger.  Todah rabah, Eva!


And today I gave a talk to an Introduction to Digital Media class, with some faculty present, and I used a title for the lecture that I've previously used for an address I've given several times, "Eight Bits About Digital Media," but rather than give the speech, I taught the class on a more informal basis, and swapped out several bits from the address for ones that I thought would be better suited and more useful for the students.  The students were bright and attentive, and it was a real pleasure.  On, and I forgot to mention that I was also very pleased with the reception I received from the faculty yesterday.


So, tomorrow I have a day off, and then on Wednesday, I'll be giving a keynote address at a symposium, my topic being "Media and Protest" (which was assigned to me, as it coincides with the focus of the event).  There's a poster for it, here's what it looks like: 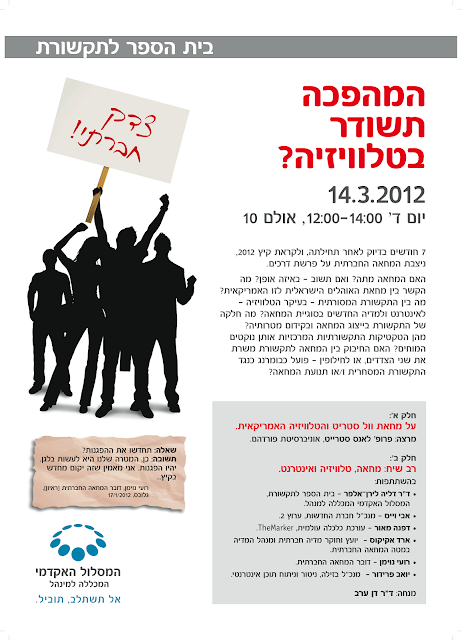 Sorry, I don't have a translation for it, but I think you get the idea.  I also received a copy of the press release that the College's PR person sent out, so I thought I'd share that as well: 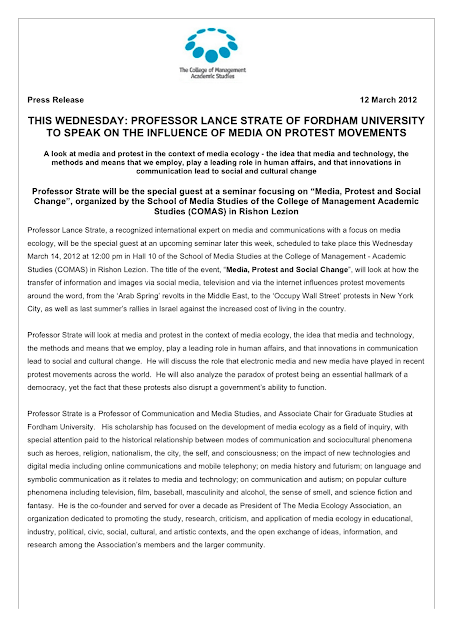 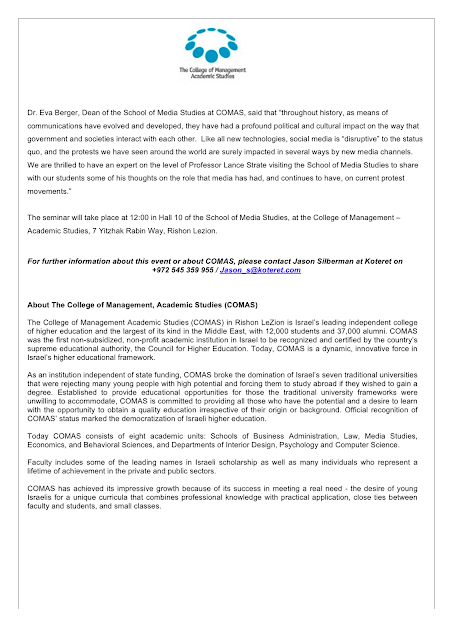 So, all I can say at this point is that I hope my talk won't generate too much protest on the part of the participants.  And hey, if you're in the neighborhood, please drop by for my keynote on Wednesday, er, I mean, Fourth Day.

Did You Say Secondary Literacy?

Recently, I had a bit of an exchange over on Facebook with my friend Bob Blechman, author of the Twitter-derived mystery, Executive Severance, discussed in my previous post, Twistery Illustrated, and easily ordered via the link over on the right of this post.

The exchange occurred in the comments section following a post by another media ecologist, Peter Fallon, and it was initiated by Bob making a comment about secondary literacy.  Now I know that there are some scholars who believe that Ong's concept of secondary orality suggests an equivalent idea of secondary literacy, but I'm not one of them.  In fact, I have some rather strong objections to the phrase, as you will see.

And yeah, sure, you can say it's just a matter of semantics, and a rose by any other name, yada yada yada.  But we know better, don't we?  We know from general semantics that words are maps of reality, and some maps are more accurate, while others can lead you astray.  In this instance, I think the map points you in the wrong direction, or at best is harder to read than it has to be.

So anyway, here is an edited version of my comments:

There's nothing secondary about electronic text, and in fact, pointing to the decline in importance of spelling and grammar online shows a distinct bias towards typographic literacy, because there is no concept of correct spelling or grammar until well into the print era.

I certainly agree that literacy via computers is different from print literacy, but there are distinctions to be made between newspaper literacy and older forms of typographic literacy, between manuscript literacy and print literacy, between reading from the bound books and from scrolls, between reading in the vernacular and in a learned language, and there also are distinctions to be made between alphabetic literacy and literacy involving other types of writing systems, syllabic and logographic, if you were to call those others literacy in the first place (literacy referring to letters, which is only used for the alphabet). Literacy in Chinese ideograms is certainly a different proposition from alphabetic literacy.

All this complexity is quite distinct from the relatively straightforward distinction Ong makes between orality that occurs in a face-to-face situation, and speech that is recorded and/or transmitted via electronic technology being secondary. This distinction just doesn't work when applied to literacy, there is no equivalent.

The reason why "literacy" is used in so many different contexts (i.e., media literacy, visual literacy, news literacy) is that it was adopted by educators who need to legitimize the teaching of other competencies. It's hard to justify a curriculum devoted to television production, or even critical television viewing, but media literacy makes it sound like it fits in as a subject to be taught in schools.

Ong doesn't fully develop the concept of secondary orality, but the idea is still meaningful, because the meaning of "secondary" is quite clear in making a distinction between first-hand speech and speech heard second-hand via electronic media. He also refers to writing as a secondary symbol system, because writing is a means of representing spoken language.

If the term "secondary" were to be used in reference to literacy, it should be used in reference to print, which is used to mass produce handwritten documents, and leaves the reader at a secondary remove from direct contact with the writer's hand, and handwriting, just as printed reproductions of paintings leave the viewer at a remove from direct observation of the painters brushstrokes.

So if anything, electronic text would be tertiary literacy, but again I don't see what purpose is served by such designations. There are more relevant distinctions, such as that of numeracy as a counterpart to literacy, and Havelock's distinction between craft literacy (where reading and writing is used only vocationally, say by accountants or priests) and social literacy (the type of literacy we are accustomed to, where we read for pleasure, read habitually, the culture itself is encoded in writing, and literacy is taught in early childhood in schools, even before we fully master speech so that that two become hopelessly intertwined).

I should add that for more discussion on the different types of orality, I have an essay entitled "Sounding Out Ong: Orality Across the Media Environments" in the newly published anthology, Of Ong and Media Ecology: Essays in Communication, Composition, and Literary Studies, edited by Thomas J. Farrell and Paul A. Soukup, and published by Hampton Press (2012, pp. 91-116).