So, back in January, I became president of the New York Society for General Semantics. And I know what you're thinking⎯why did I wait until now to let you know about it? Well, the organization had been inactive for a couple of years, and it's taken some time to get it started up again.

Actually, it's still in the process of re-organization, but I've set up a new website at http://nysgs.org which has a modest amount of resources, as well as general information about the organization and what it represents. Go check it out. And please feel free to subscribe for updates on events and other news, especially if you are in the vicinity of the New York Metropolitan Area.

Here's the new logo for the NYSGS, courtesy of my old friend Peter Darnell of Visible Works Design: 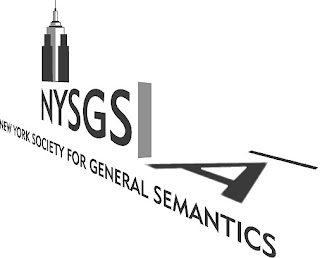 As you may know, that letter A with the bar or line over it is a symbol for not A or null A, which is short for non-aristotelian, general semantics having been developed as a non-aristotelian system by its founder, Alfred Korzybski. What he meant by that was a kind of post-Aristotelian logic that could take its place as principles of thought alongside the new non-Newtonian physics and non-Euclidean geometry that were associated with Einstein's paradigm shifting revolution in physics in the early 20th century. Science fiction fans may also recall the Korzybski-inspired null-A novels by A. E. van Vogt.


Anyway, when I first became associated with the NYSGS many years ago, it was run by Allen Flagg, and held monthly meetings that generally consisted of a speaker, or other kind of presentation, on topics of interest, such as language, symbols, media, and technology, communication, consciousness, and culture. I don't know very much about the early history of the organization, I'm sorry to say, except that it was founded in 1946, on September 9th of that year to be exact. And its name indicates a connection to the larger Society of General Semantics that was founded three years earlier by English professor S. I. Hayakawa (later to become notorious as president of San Francisco State College and then United States Senator from California), and communication scholars Wendell Johnson and Irving Lee. In 1948, the SGS changed its name to the International Society for General Semantics, a name it retained until it merged with the Institute of General Semantics in 2004.

The NYSGS has had a long association with the IGS, including serving as a co-sponsor of the annual Alfred Korzybski Memorial Lecture and the symposium that follows, which is almost always held in New York City. And given the New York connection, there is also a significant association with Neil Postman, who was the former editor of ETC: A Review of General Semantics for over a decade⎯ETC was founded by Hayakawa and published by the SGS/ISGS until the merger, after which it has continued to be published by the IGS, most recently under the editorial helm of my friend, Ed Tywoniak. And among the resources that are available from the site are Postman's piece on media ecology and general semantics from the 70s, and a wonderful document entitled, Instant Pep* for Language (*Postman Enthusiasts Project) by the Staff of Fort Meyer Elementary School, Arlington, Virginia, originally published by the ISGS in 1968. And there's more of interest on the site as well, but I'll leave it for you to explore.

So, my plan is to hold events at The Players, a club in the Gramercy Park section of Manhattan that was originally founded by Edwin Booth, the most famous stage actor in 19th century America, and brother of the infamous John Wilkes Booth, along with Mark Twain and other notables, back in 1888. According to their website, "The Players is a private social club that draws its membership from the international theatre community, the related fields of film, television, music, and publishing, as well as respected patrons of the arts." This should add some creative energy and synergy to our programs.

Our programs will begin in earnest in the fall, but we'll be holding a preliminary meet-up at The Players on June 2nd. It's free, but registration is required. All the information is over there on http://nysgs.org, so let me wrap this up right now, so you can stop wasting your time over here, and go take a look, and maybe sign up. And otherwise, stay tuned!

Back when I started this blog in 2007, one of my earliest post was entitled The Fragile Community, which was about a book co-authored by my friend, the distinguished communication scholar, Larry Frey. Subtitled, Living Together with AIDS, the book is based on ethnographic research Larry and co-author Mara Adelman conducted on a residential community for people with AIDS.

The reason this came to mind is that one of my former MA students from Fairleigh Dickinson University, Margaret Roidi, recently published an article in Synergy: The Online Journal for the Association for the Tutoring Profession. According to the website, Synergy "is the national peer-reviewed online journal for ATP; the mission is to provide an avenue for scholarship and discussion to further the knowledge of learning processes, tutoring practice and the administration of tutoring services." As for the article she published, its title is: "Tutor Training Procedures in Higher Education: Creating a Community of Lifelong Learners" (and yes, it's available online, I've conveniently linked the title to it, so just feel free to click away).

Now, aside from congratulating a former student on a significant achievement, I do want to acknowledge the important role that tutors play in the university setting, a role that often goes unremarked. Sometimes students need something more than class sessions can offer, some degree of individualized help, and this is where tutoring comes in. It can make the difference between student success and failure. As a faculty member, I do want to note that we try to give personal attention to students who need it. But much depends on class size, and even at an institution like Fordham University, where there are almost no large lecture classes and a tradition of cura personalis, there is only so much that a faculty member can do.

So, tutors are an essential component of any institution of higher education. That much is clear. But when you think about what tutoring entails, generally working with students on a one-on-one basis, it seems almost the antithesis of community. And yet, more and more, there is an emphasis in higher education on building communities of learning. As Roidi discusses, tutors are, or ought to be, an important part of these learning communities, to improve their teaching skills, and outcomes with students, and the university as a whole. As she puts it in her conclusion, "a community of tutors can benefit tutees, institution of higher learning, academic support programs, and the community at large" (p. 12)

Educational technology is an important component of this kind of initiative, as she also notes: "Tutors as well as instructional designers must possess a highly adaptive leadership mindset that can be influenced heavily by the rapidly evolving technological environment (McLuhan & Gordon, 2003)" (p. 3). Certainly, a media ecological observation!

And I think that the basic statement that Adelman and Frey make in The Fragile Community is worth repeating here: "Communication is... the essential, defining feature⎯the medium⎯of community" (p. 5). This is as true for learning communities as it is for residential communities, if not more so.

Building community⎯there once was a time when we could take it for granted as a basic function of communication, and the basis of all human life. Here and now, we find it more challenging than ever before, and therefore more essential.