In my previous post, The Road Untaken, I shared my unused poetic statement for the poetry reading and performance held at last month's annual Media Ecology Association meeting at the University of Toronto. And I also included all of my unused Wordle word clouds that I had provided to go along with it.

So now, to be totally fair, let me share what was used instead for the poetry event. The illustration was by Marshall Soules, and the blurb was excerpted and altered from what I wrote: 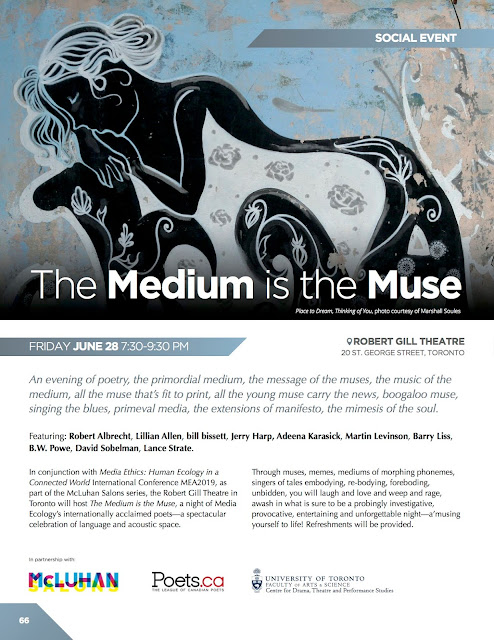 So, this is the poster version, there were also postcards with the image on one side and the text on the other. And as you can tell, there were ten of us participating, which made for a great deal of variety, coupled with brevity, that the audience appeared to really appreciate.

Unfortunately, there was no video camera set up, so there's not record of the readings and performance, but there was, you might say ironically, a photographer taking pictures of us, so we have a record of the poetry event, just without the words.

They shared the pictures with us, and since there were so many, I am just going to share the pictures form my turn at bat. And I hasten to add that I do not find the photos particularly flattering, no, not at all, but I include them here in the interests of documentation, as Blog Time Passing is my official blog of record. So here goes:

Now, you may notice that all that I have in front of me is a music stand and a microphone, and I should also add that there was a small stage, just a couple of steps up, so slightly elevated. And there were very bright stage lights, so bright that I could not see the audience at all. Anyway, back to the photos, which include a couple of audience shots:

At this point, I'd just like to note that for a couple of the poems that I read, I used hand gestures, which the photographer captured here and there:

Whew! I know that was a lot, and I wouldn't exactly call it poetry in motion, or in still life, but there you have it. And since this is something of a photo essay, let me add one more: 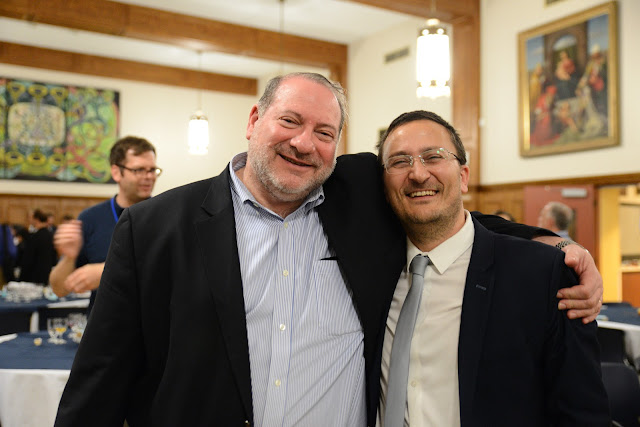 That's a snapshot of me with Paolo Granata, the convention organizer and MEA Vice-President. No words necessary here.